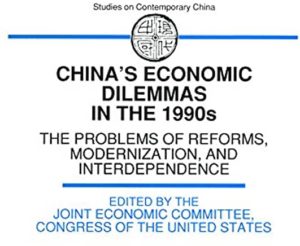 China’s Economic Dilemmas in the 1990s: The Problem of Reforms, Modernisation and Interdependence: Edited by the Joint Economic Committee, Congress of the United States Copyright © 1993 Taylor & Francis – Published 2015 by Routledge

SUMMARY & INTRODUCTION: China;s rural industry has been the most vibrant sector of the national economy sine the mid-1980s. For several decades after they first emerged from the 1958 Great Leap Forward as a product of “self-reliant” development, rural factories were seen both in and outside of China as an ancillary part of China’s economic development. They offered a means by which rural surplus labor could effectively use local resources. By the late 1960s, rural industry became a conduit for introducing urban technology to the rural areas. Yet it remained part of Mao’s cellulat approach to development and his goal of protecting the urban sector from the economic demands of the countryside. Rural, not urban, industry would supply finances and material for agricultural modernization, leaving urban, state-owned industry free to fulfill urban demands.

Links:
This book is available in several formats on Amazon

Struggling Over Land in China: Peasant Resistance After Collectivization, l966-l986

Struggling Over Land in China: Peasant Resistance After Collectivization, l966-l986