A Photo Essay of a Failed Reform 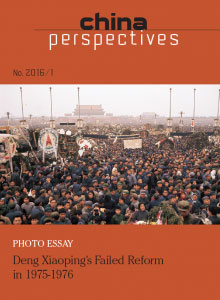 Beida, Tiananmen Square and the Defeat of Deng Xiaoping in 1975-76

ABSTRACT: In mid-1975, Deng Xiaoping, with Mao’s blessing, initiated reforms that targeted the negative consequences of the Cultural Revolution. To bolster Deng’s effort, Mao endowed him with penultimate authority over the Party, government, and military. However, in late October, Mao turned on Deng, and within five months, Mao and the radicals toppled Deng from power. As a foreign student at Peking University, David Zweig observed and photographed four key points in this historic struggle:
(1) the initial establishment of a “big character poster” compound at Peking University;
(2) emotional mourning for Zhou Enlai in Tiananmen Square following his death:
(3) the intensified assault on Deng in February 1976 in the posters at Peking University; and
(4) the massive demonstration of support in Tiananmen Square on 3-4 April for the end of Maoist politics.