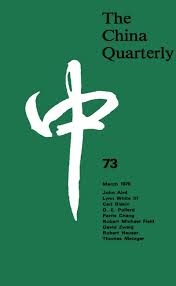 ABSTRACT: During the two years I spent as an exchange student in the People’s Republic of China, from October 1974 to July 1976, under the auspices of the Sino-Canadian Student Exchange Programme, I was witness to such major political events as the convening of the Fourth National People’s Congress, the Dictatorship of the Proletariat Campaign and the Campaign to Criticize Water Margin. This report focuses on the events that occurred in the last 10 months of my stay, and most particularly on the Educational Debate of late 1975, the passing of Chou En-lai, the campaign against Teng Hsiao-p’ing, and the events surrounding the T’ien An Men Incident. My sources include personal observations: in the first few months of 1976 I witnessed the uneven unfolding of the “Educational Debate,” and I was in T’ien An Men Square on 3 and 4 April, when the first open attacks against the “Shanghai four” took place, on the eve of the riot of 5 April; material I collected from posters at Peita and in Shanghai; conversations with other foreign and Chinese students; and various contacts with Chinese teachers and officials. I also had contact with some members of the foreign community.