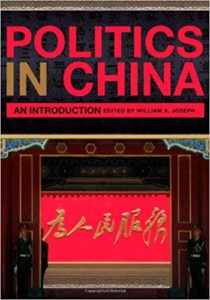 SYNOPSIS: Sixty years ago, China was one of the poorest countries in the world, populated mostly by rural peasants, and still suffering from more than a century of internal turmoil and international humiliation. Today, China is a rapidly modernizing economic dynamo with growing global influence. Politics in China is an authoritative introduction to how this transformation occurred, and how China is governed today. Written by an international team of highly-regarded China scholars, each chapter offers an accessible overview of a key topic in Chinese politics. The opening section provides readers with a firm grounding in China’s modern political history, from the fall of the last imperial dynasty through era of communist rule under Mao Zedong, Deng Xiaoping, and their successors. The next section covers the political system, with chapters on Communist Party ideology, the structure of the political system, and the policies behind the country’s spectacular economic performance. The book then focuses on several major issues in China today: politics in the countryside and the cities; the arts; the environment; public health; and population policy. The final chapters cover politics in four important areas located on China’s geographic periphery: Tibet, Xinjiang, Hong Kong, and Taiwan.

Comprehensive and fully up to date in its coverage, Politics in China is essential not only for students studying contemporary China, but for any reader interested in learning how this rising power has evolved in recent times and the workings of its current political system.